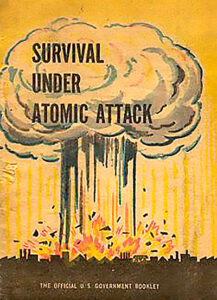 J. Robert Oppenheimer was said to have existed on “martinis, coffee, and cigarettes” when he was directing the Allies efforts to build the bomb in World War Two. Many crucial formulas were scrawled on cocktail napkins by the leading scientists of the Manhattan Project during Oppie’s nightly martini parties at his house on Bathtub Row.

Owing to the difficulty of getting supplies to the remote Los Alamos lab, Oppenheimer crafted his own martini recipe that used only a dash of vermouth, as well as lime and honey.

Stir the gin and vermouth with ice until chilled. Then strain into a chilled martini glass whose rim has been dipped in equal parts lime and honey. For the toast, as Oppenheimer himself often said, “To the confusion of our enemies!”