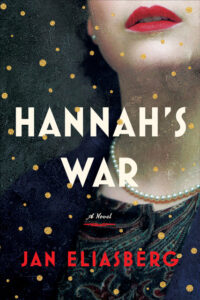 Award-winning filmmaker Jan Eliasberg’s Hannah’s War, for readers of The Nightingale and The Alice Network, is a thrilling historical debut about a female scientist working to develop the first atomic bomb during World War II, and the young military investigator determined to uncover her secret past.

“I flew through Hannah’s War, a gripping true story of a brilliant woman physicist working to develop the first atomic bomb and the secret she fights to protect.”

in 1945, Dr. Hannah Weiss, an Austrian-Jewish physicist, is removed from her essential work with the Critical Assemblies Team at the Los Alamos National Laboratories and is taken for interrogation. Major Jack Delaney, a rising star in the shadowy world of military intelligence, is convinced that someone in the Top Secret Manhattan Project is a spy; the captivating, brilliant and mysterious female scientist soon becomes his primary suspect.

World War Two reaches its crescendo as the Allies and the Germans are racing to complete and test the atomic bomb — a weapon powerful enough to end WWII and, perhaps, all future wars. A weapon that, in the wrong hands, could destroy the world.As Jack ruthlessly questions Hannah about her involvement with the infamous Kaiser Wilhelm Institute in Berlin ten years earlier, and her apparently friendly relationships with high-ranking members of the Nazi party, he slowly becomes seduced by her intelligence and quiet confidence. Is Hannah a Nazi spy, or is she protecting a far darker secret of her own? When Jack finally uncovers the truth about her life in Berlin, Hannah must compromise her political allegiance, and choose between two lovers, and two versions of history.

A vivid, page-turning, and inspiring re-imagination of the final months of World War II, and the brilliant researchers behind the first atomic bomb, Hannah’s War is an unforgettable love story about an exceptional woman, and the dangerous power of her greatest discovery.

Find out more about the story behind Hannah’s War, the real-life characters and events that inspired Jan Eliasberg.