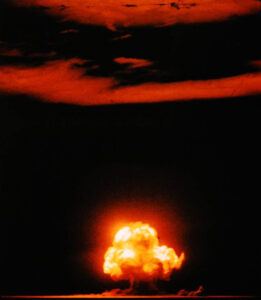 July 16th will mark the 75th anniversary of the first atomic test, known as Trinity. The day is rightly known as the day the world changed forever, entering into the “nuclear age.” The Trinity test was the result of an extraordinary number of characters, circumstances, and scientific principles that came together like pieces of an intricate puzzle to make up the complex tale of the evolution of the atomic bomb.

Many names are known, inscribed in the history of the era: J. Robert Oppenheimer, leader of the scientific project in Los Alamos, NM. Albert Einstein who, along with émigré scientists Leo Szilard and Edward Teller wrote the famous “Einstein letter” to FDR warning that German scientist Otto Hahn had discovered nuclear fission making it almost certain that Germany was already working on an atomic bomb, thereby prodding America to join the race to build it first. But there is one name, perhaps the most important one, that is not known, even to many students of physics, the name of a woman: Dr. Lise Meitner.

Meitner was an Austrian physicist, a Jew, working at the highest levels of research at the Kaiser Wilhelm Institute in Berlin in the 1930s. Her primary focus, along with that of her long-term partner, Otto Hahn, was radioactivity and nuclear physics. She and Hahn were on the verge of a ground-breaking discovery when Austria was annexed. Meitner’s privileged position, and all the protections her colleagues had promised, evaporated within six terrifying hours, as she, suddenly a stateless Jew, fled Berlin within hours of being captured and sent to the camps.

Hahn remained in Berlin and was named interim head of the Kaiser Wilhelm Institute “until a loyal Nazi could be found to take over.” But Hahn was so dependent on Meitner that he continued to collaborate with her, even after she’d fled. He met with her in Copenhagen in

secret and sent her, on postcards via courier, the results of experiments they’d designed together. It was Meitner not Hahn, who analyzed the results and recognized that they had split the atom. The notion that a nucleus can split and be transformed into another element was radical; no one had fathomed it before. Meitner provided the first understanding of how and why this had happened. She was also the person who named the achievement “nuclear fission.”

The paper Hahn published in Germany did not have Meitner’s name on it. Hahn might have been motivated by the fact that, if the paper had had borne her name, it would have been discredited as “Jewish Physics,” and he certainly was aware that including a Jewish woman on the paper would cost him his career in Germany. So, he published without Meitner, falsely claiming that the discovery was based solely on insights gleaned from his own chemical purification work, and that any insight contributed by Meitner played an insignificant role.

In his paper, however, Hahn had trouble explaining “his” findings; it was Meitner, in a letter to the editor, who explained the mechanism of “Hahn’s discovery.” After the war, when Hahn was awarded the 1945 Nobel Prize for the discovery of nuclear fission, he conveniently left the record uncorrected, robbing Meitner of the Nobel Prize she rightfully deserved. In Meitner’s diaries, she writes poignantly about sitting in the audience at the Nobel Ceremony, hoping that Hahn would mention her name: he did not.

Her disappointment was palpable, but it was accompanied by a kind of resignation, and a self-deprecating justification of Hahn’s omission. Hahn rationalized her exclusion and others, including a misogynist Nobel committee, buried her role ever deeper. The Nobel “mistake,” was never acknowledged, much less rectified.

This was neither the first nor the last time the Nobel committee made such a “mistake.” Many people are familiar with Rosalind Franklin whose Photo 51 enabled James Watson, Francis Crick, and Maurice Wilkins (who had stolen Photo 51 off Franklin’s desk without her permission) to deduce the structure for DNA. Franklin’s image of the DNA molecule was key to deciphering its structure, but only Watson, Crick, and Wilkins, the thief, received the 1962 Nobel.

History has a way of conveniently “disappearing” the work of extraordinary women. It’s this generation’s job to fill in those gaps in history. We need to actively look for women’s stories, and put them back into the historical narrative. What better way to restore Lise Meitner to her rightful place in the history than to award her the Nobel she so rightfully deserves?

The Nobel committee argues that it doesn’t award post-humous prizes, but why should the arbitrary rules of a committee notoriously rife with human politicking and bias take precedence over accuracy and truth, the goals of the scientific method.

Dr. Meitner herself said: “Science makes people reach selflessly for truth and objectivity; it teaches people to accept reality, with wonder and admiration, not to mention the deep awe and joy that the natural order of things brings to the true scientist.”

Lise Meitner was a true scientist; it’s past time for her be honored as one.